I decided to try out the league of extraordinary blogger's challenge. This week it is talking about a something within pop culture that you were forced to endure. My god, so many choices. I am going to go with Footloose. It was one of those movies that simply "everyone" had to see, and my older brother dragged me to this epic story of a kid who just wanted to dance. 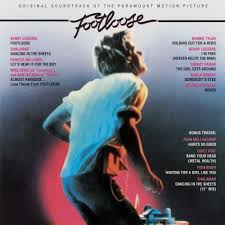 Of course it takes place in a small town that would make Marx and Lenin cringe with how insanely oppressive the town elders were on dancing. Here is the deal, my family moved around a lot when I was a kid, I mean A LOT, I have lived in Norway, Iran, Thailand, Scotland, Spain, and most culturally off putting, Louisiana. But we were from small town Iowa. In fact I now live in big city Iowa (Cedar Rapids is the second largest city in the state). But I have lived in small towns with closed minded people. I learned to play D&D when living in Scotland, moved back to Iowa and got all of the anti D&D is Satan's game (It's actually more of Cthulhu's game but I wasn't giving them inbred hicks the satisfaction!)  But this town and it's artificially created culture struck me as ass backwards. So the kids can drink and party in barns, but not dance? Why the hell would you want to dance? Is it really that incredible? Well I guess Kevin Bacon thought so.

Now don't get me wrong I have nothing against Kevin Bacon, or John Lithgow, or most of the cast. but the movie was so contrived that 12 year old me thought it was a load of crap. and an additional 28 years on this planet hasn't exactly warmed me to this movie.

Then there is the soundtrack, or more to the point the title track. I had a class mate who insisted that if any music be played it was this on GODDAMN song!  I hate this piece of music almost as much as I hate Vanilla Ice's opus "Ice Ice Baby" (Hey you steal from Queen and David Bowie, you deserve all the hate you get!) The group the Bloodhound Gang, in their song "Boom" have a lyric. "You'll be scremin like a mimi when you see me comin' near you, like a Kenny Loggins record, no one's ever gonna hear you," If only. I swear, If I never hear this song again in my life it will be too soon.
Posted by Big J at 1:25 AM

Email ThisBlogThis!Share to TwitterShare to FacebookShare to Pinterest
Labels: Rants