So this is the new assignment from the League of Extrordinary Bloggers :

You have the opportunity to spend the night at any residence in pop culture. Where do you go?

I had to think about this one, I mean there are plenty of choices- Victoria chose the mansion of Darla Dimples from the film "Cat's don't Dance" which I have never seen, a bit of a pink nightmare in my opinion. Jason  chose to spend a night in the burbs, with Bruce Dern, Tom Hanks and Carrie Fisher before she got all crazy and stuff. And Ian? had a few options including area 51, and the Big Bang theory apartment.  As for me there are all sorts of choices, the Tardis, a Stateroom on the USS Enterprise, or Babylon-5 even the Batcave. but My luck there would be a Dalek attack,Borg assault or I would got caught up in a deadly political game of cat and mouse with a Centauri, or just gassed by the Joker, so nah, I want a place with geek cred, cool adventures but where I can view in relative safety and luxury. So here is my vote- TRACY ISLAND! 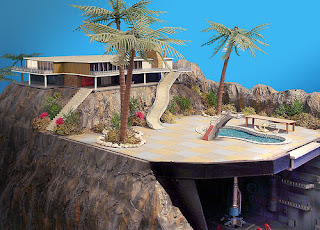 swinging pad on a tropical island with all the luxuries and tech abound. most of the action in the show took place far away from their fabled abode. just sun, sand and high tech rockets that pop out of the swimming pool. Crystal blue waters, and some ingenious bat cave like environments with far less threat of sociopathic supervillians ruining my vacations. As an added bonus, lady Penelope. 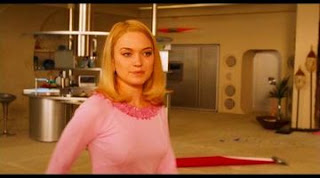 Need I Say more?
It seems like a win to me. and nicer than club med, or some overpriced Caribbean resort!
Posted by Big J at 2:40 AM